Yasuko Hayakawa ; She lives in Akita, Japan. She studied under Hajime (Sanpei) Ohno ,then she started her professional career as a piano player in 1986. 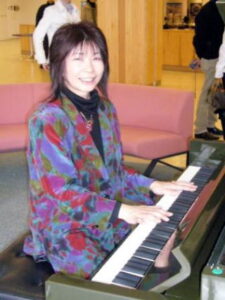 Meanwhile encounters with the great musicians such as Mr. Barry Harris, and gigs at the live house in Los Angeles, CA, in 1996, she participated in the jazz program of the NHK radio FM for her first time.
On the same year, her annual concert, “Swingin’ Love” was began.
Recently, she is proceeding live mainly in Akita and occasionally Tokyo and other cities with her regular members, Tetsuo Miura (b), Masahiro Tajika (ds),and Joh Yamada (as).
In addition, she has collaborated with other brilliant musicians such as Bob Maze, Lewis Nash, or Richard Davis. She plays in the 5spot in Akita on a daily basis.

How she started involving with Jazz ?

Musicians who have influenced the most

CDs listening the most recently

What are you trying to achieve in the future ?

—Play at a live house as much as possible, and I hope I have chance to play for many people.

Musicians to collaborate with